Just as the last years, we’re very happy about the worship bands that will be at Freakstock. Some are from the Jesus Freaks, some from elsewhere. Either way there will be a lot of Hallelujah’s, that’s for sure!

Die ehrlichen Arbeiter
Country gospel, Jesus Freaks songs und old hymns Johnny Cash style Preferably honest, a bit rough and rhythmic like a steam engine THE HONEST WORKERS roll through songs written by others. Drums, double bass and guitar lay the foundation for traditional songs and lyrics which where written during man- destroying work or in a desperate existance. But they tell of hope which can not be enslaved. It proved to be lucky that also Jesus Freaks songs and old hymns sound fresh with the Johnny Cash rhythm and the whole package seems to be extraordinary.

Havelkinder
We are the “Havelkinder” – the kids of the river Havel – and we are playing German and English worship-hits in acoustic versions. We are doing sort of a chaotic folk-family-worship with 2 ukuleles, double bass and eggshaker – Jesus-Freaks-Songs, childrens-worship, Hillsong and own stuff – a wild mixture. Currently without fixed Freaks-group, we’re mostly playing music together as a family, keep learning from one another and are happy about God’s presence in us and in our community.

Herztöne
The roots of the Herztöne-Band can be traced back to the Herztöne e.V. where creative musicians and songwriter gathered to write songs for Jesus. The band is performing in different settings with musicians of the Herztöne pool. Own written and known worship songs will be played at the morning praise.

MSK Collective
Steve, Jason, Eric and Chris got to know each other in the Mosaik Community Dusseldorf and musically came together as a project band for the Wine & Worship events. The MSK Collective likes to describe themselves as an “alternative worship band”. Most of all, they play their own songs, which are written in their community, and which are characterized by a deep honesty and authenticity. When they sing and play it really comes across that their lyrics not only scratch the surface, but also honestly tell about their own journey in faith and with God. The music of the MSK collective makes its home in simplicity and authenticity. Steve and Eric are from Nashville, Tennessee, and they have this penchant for good, handmade music. This “Nashville charm” combines within the collective with the indie music rooted guitar play of Jason and the supporting drumming of Chris to an exciting genre mix, which develops a powerful dynamic and invites people to participate.

Orion Walsh
After a decade of putting out albums and touring, Nebraskan singer-songwriter Orion Walsh will soon release “7”, his seventh studio album with folk/roots label Sower Records. Full of highly personal storytelling, “7” is truly a mature step forward for this well traveled troubadour.

Praiser
Praiser from Hamburg started in 2009. Robin, André and Marcus play Hardcore-Punk and in general their own songs. But they all got a past including different worship-groups, they also played as praiser in services and they released an album with previous unreleased Jesus Freaks-worship Songs called “praisydal tendencies” in 2013. Since they are convinced that worship includes spontaneity and is not always predictable, some things remain unscheduled. It might be that the distortion stays silent and it’s also possible that they thrash all the time. We will know it, when they start praising.

progressus
For us, there is just one goal: Be tools to create a moment in which people can step into Gods presence. That being said, we’re still at the very beginning of our musical journey. We’re going forward and in the process we’re evolving. All of this is summed up in our name: progressus from the Latin language. Exactly these qualities can be found in our music as well. Our individual experiences in jazz and rock are merged into something new. This new mix invites everyone to dream, to dive deeper and ultimately creates a moment for you and God only.

TON
We’re called TON a band from Berlin. We’re playing Songs from the Jesus Freak movement and also we love to play songs from Bethel. We love our Lord and saviour with all our hearts and to worship Him is our greatest passion! To bring people into His presence and seeing them changed through our music, makes our hearts beats faster.

Trafo
Trafo love to worship the Lord in all facets of alternative Rock. Powerful guitars and cool grooves take turns with quiet and soft passages. The four guys from the Jesus Freaks in Remscheid love to seek and find God in worship with all their passion, just as they are. They all share the desire to experience heaven on earth and have life changing encounters with God. 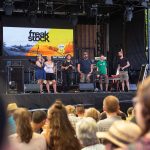